Morrisons has pledged to be the first supermarket to be completely supplied by ‘net zero’ carbon British farms[1] by 2030, five years ahead of the market.

Over the next nine years, Morrisons will work with its 3,000 farmers and growers to produce affordable net zero carbon meat, poultry, fruit and vegetables.

Morrisons expects that the first products to reach net zero carbon status will be eggs as early as 2022, followed by lamb, fruit, vegetables, pork and beef in the years to follow.

UK agriculture currently accounts for 10 per cent of all UK greenhouse gas emissions, with new research revealing that two thirds of people consider the environmental impact of the food they eat[2]. The National Farmers Union has asked farmers to work towards a 2040 net zero goal, and other supermarkets are working towards 2035. 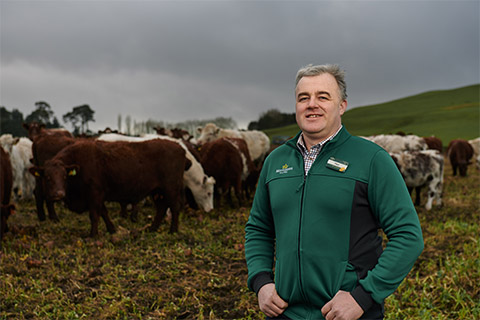 Morrisons is uniquely placed to reach this goal five years ahead of industry as it is British farming’s biggest supermarket customer. Morrisons has its own expert Livestock and Produce Teams, works directly with farmers, and takes meat, fruit and vegetables direct from farms to its 20 fruit, vegetable and meat preparation sites[3].

This month, Morrisons will start working with a selection of meat and produce farmers - to create net zero carbon farm ‘models’. Together with the farmers they will look at the emissions picture through the whole lifecycle of farm produce - from germination to leaving the farmgate for a Morrisons store. Once a workable blueprint has been established, the models will then be shared with all Morrisons farmers, so that all food can be produced in this net zero carbon way.

Within agriculture, beef farming is the most carbon intensive - generating 45 per cent of carbon[5] emissions for only five per cent of products sold. Nearly half of this is down to methane produced by cattle. So in addition, Morrisons will work with its beef farms to use smaller cattle breeds, pick low methane feeds, and look at methane reducing supplements (e.g. seaweed). 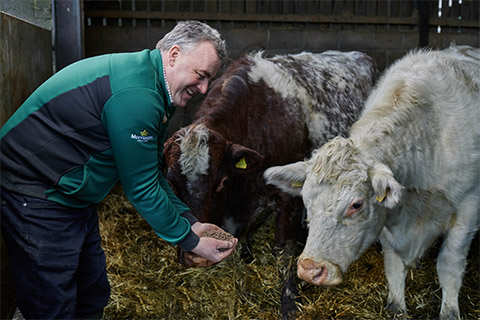 David Potts, Chief Executive of Morrisons, said: “Climate change is one of the biggest challenges for our generation and growing food is a key contributor to greenhouse gas emissions. As British farming’s biggest supermarket customer, we’re in a unique position to guide our farms and help lead changes in environmental practices. It’s years ahead of industry expectations - and an ambitious target - but it’s our duty to do it.”

Environment Secretary, George Eustice MP, said: “The UK is the first major economy to legislate for net zero emissions by 2050. Our farmers will play a key role in achieving this. It is encouraging to see Morrisons commit to being supplied by net zero carbon British farms on such an ambitious timescale, helping to protect the environment for future generations.”

Minette Batters, President of the National Union of Farmers said: “British farming has a key role to play in the nation’s drive to net zero. Our contribution spans three pillars of action - reducing emissions, storing carbon on farmland, and renewables and the bioeconomy. Our members are already playing their part to help achieve the NFU’s ambition of reaching net zero agriculture by 2040 and want to do more. I applaud Morrisons on its commitment and look forward to continuing our good working relationship.”

Patrick Holden, Chief Executive of the Sustainable Food Trust said: “Morrisons has shown real leadership in setting challenging targets for emission reductions and for encouraging their suppliers to produce in more sustainable ways.”

Morrisons net zero carbon UK agriculture target forms part of its plan to become net zero for emissions by 2040, in line with the international Paris Agreement. Reducing carbon in primary food production[6] forms a key part of this programme.

1.  Who supply into Morrisons foodmaking sites

2. Agriculture and Horticulture Development Board, January 2021

4.  In nine years the supermarket expects to plant millions of trees as part of the programme

5.  British beef is however 2.5 times more efficient than the global average 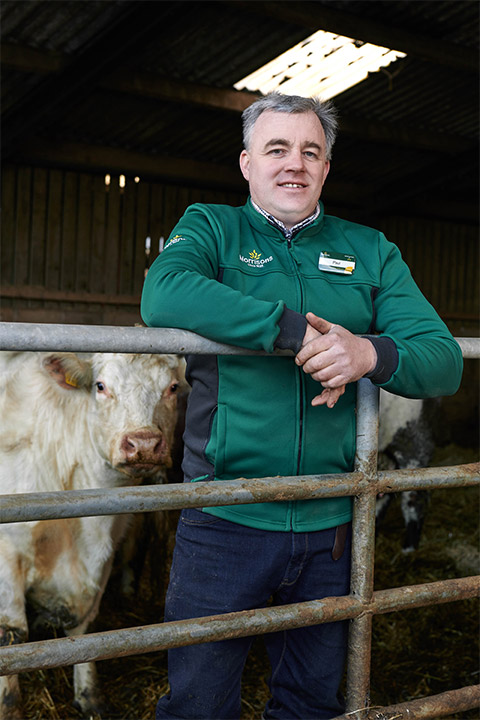 Morrisons aims to achieve its net zero farming goals by working with farmers in its supply chain on a holistic strategy, managing animal and worker welfare as well as farming for environmental sustainability. 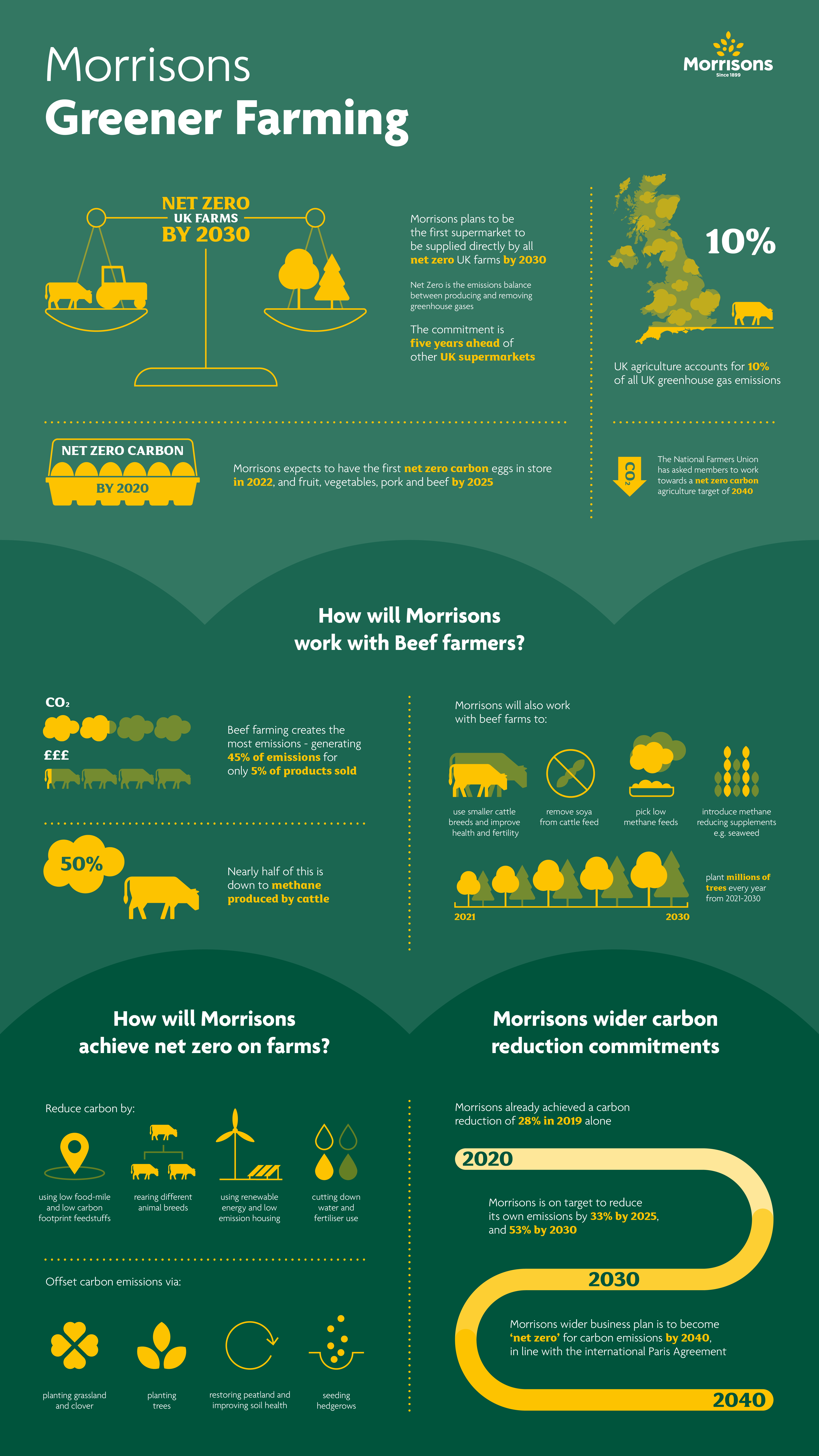 Morrisons will work with a beef farm, which supplies into its Woodheads meat site, to create a net zero carbon model. The model will include: selecting smaller cattle breeds; picking low food mile and low methane feeds; including feed additives which suppress methane (e.g. seaweed); identifying low emission and renewable energy cattle sheds; improving soil health and sequestration (e.g. by clover planting); reducing water use; reducing fertiliser use; plus increasing woodland, tree and hedgerow planting. Six additional farms will be involved in further tests and trials throughout the year.

Net zero carbon Morrisons beef products may be available for customers to buy as soon as 2025.

Morrisons will partner with six pig farmers over the next year. Its net zero carbon farm model will look at: removing and reducing soya from pig feeds; using renewable energy; and the sequestration of soils to be carbon positive.
Net Zero carbon Morrisons pork may be available for customers to buy by 2025.

Six lamb farmers will work in collaboration with Morrisons to create a carbon neutral model over the next 12 months. The model will map out: the best feed types; renewable energy for housing; woodland planting; carbon positive soil sequestration; and peatland restoration.

Net zero carbon Morrisons lamb may be available for customers to buy by 2025.

Over the next year, Morrisons will work with six egg farmers, who supply into its Chippendale egg site, to create a carbon neutral model. The model will include: removing and reducing soya from feeds; using renewable energy; and the sequestration of soils to be carbon positive.

Net zero carbon Morrisons eggs may be available for customers to buy in 2022.

Morrisons will work with a group of potato, carrot and onion growers, plus a group of soft fruit growers. The net zero carbon model will include looking at: crop yields and rotation; developing different varieties; using renewable energy and battery technology; reducing fertiliser; and the sequestration of soils to be carbon positive.

Net zero carbon Morrisons fruit and vegetables may be available for customers to buy by 2025.