We’ve brought back one of the world’s best known wines – Beaujolais Nouveau – after more than 20 years. As big a part of the 1980s as Filofaxes, wine bars and brick-sized mobile phones, this ‘retro’ red is set to appeal to those who want to take a trip down memory lane, as well as those about to discover its light, fresh flavours for the first time. 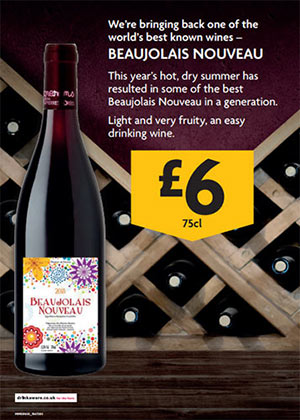 Did you know…
By French law, this wonderful wine can only go on sale at 12.01am on the third Thursday of November each year - Beaujolais Nouveau Day.

At the height of its fame in the 80s, top London restaurants would race each other to get the wine across the Channel first and serve it to City diners the same day. However as the 80s became the 90s, and tastes and fashions moved on, we fell out of love with Beaujolais Nouveau - shops stopped selling it and restaurants dropped it from their wine lists. However, this year’s hot, dry summer has resulted in an extremely high quality crop of Gamay grapes which should produce some of the best Beaujolais Nouveau in a generation.

“We're expecting this Beaujolais Nouveau to be the best for many years. Its light fruity style is in line with what many wine drinkers are looking for today and so it’s a perfect time to bring back a wine that many of our customers will still remember fondly from it’s heyday in the 1980s.”
Clive Donaldson, Morrisons Wine Sourcing Manager

Beaujolais Nouveau is a vibrant purple-pink wine made from Gamay grapes that is extremely young – it goes into the bottle just six to eight weeks after harvest. This gives makes it a light, easy-drinking and very fruity wine with banana, strawberry dark cherry and pear drop flavours. Experts recommend that it is served slightly chilled to 13 degrees centigrade.

The dry light red style makes this a brilliant wine with lighter meats such as gammon or pork, cured meats or fresh youthful cheeses like Wensleydale.

The majority of Beaujolais red wine is made by a different method than most wines - called semi-carbonic maceration, which gives dry wines with good ruby purple colour and bursting with dark cherry fruitiness to the wines without the weight of tannin or astringency of other reds. Generally these are wines to drink young and can unusually for reds suit being lightly chilled. While deep in colour Beaujolais is low in tannin making this a red wine for those people who may not normally like reds.

Other Types Of Beaujolais Wine

The ‘entry level’ wines are the lightest fruity reds made from sandy soils in the south of the region.

Over time the top villages established a reputation for slightly deeper fuller flavoured Beaujolais and these wines were distinguished by adding the word 'Villages' to their name.  The grapes for these wines are grown on granitic soils in the middle of the region.

At the top of the Beaujolais pyramid are the Beaujolais crus - 10 villages that established such an individual reputation and style that they were allowed to market the wines under their own name...

Many of these names such as Fleurie are familiar to customer on the UK who may not realise that they are Beaujolais.

What Food Goes With Beaujolais Nouveau?

As a lightweight red, Beaujolais Nouveau goes well with lighter savoury dishes and could even be an alternative to a full-bodied white. Here are just some dishes and light bites to try with your next bottle.

Grilled Halloumi is rich in flavour - and along with mint is delicious with Beaujolais Nouveau.

Chicken and pesto works wonderfully with Beaujolais as a light lunch or suppertime snack.

Our The Best Somerset Brie makes the ideal nibble with a bottle of Beaujolais Nouveau.

(left) Morrisons The Best Beaujolais Villages
Made for us by the talented team at the Cave des Chateau de Loges, this wine has a little more depth of plum and black cherry and a touch of spice on the finish.

(right) Morrisons The Best Fleurie
Classic Fleurie with lifted floral notes, supple medium weight dark cherry fruit and a fine elegant finish.  I blended from 2 parcels - one with lovely perfume and generous fruit and another with very fine structure and length.  The blend was the perfect balance of the two styles.

Wonky Vegetable Soups To Cosy Up With 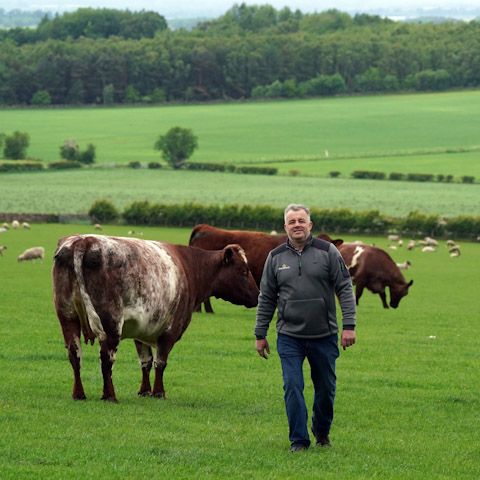